The All The Emotions Project 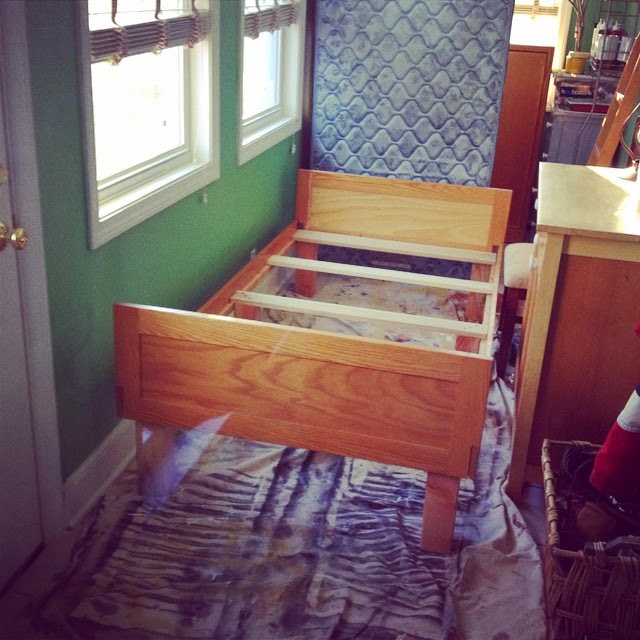 Sometimes, we fight about stuff that isn't very important. The fights seem trivial and odd. But usually, there's more going on underneath the surface.

For example, Mr. Sean (aka the two-almost-three-year-old) is very much outgrowing his toddler bed. And so I, Melissa, decided that a new bed for him would become Part I of a never-ending refinishing job we'll call: The All The Emotions Project.

I watched a couple of DIY chalk paint videos online and bought the paint and wax. I was pumped and Jake was pumped. We were blissfully unaware of what was to come.

The first bump in the road was when Jake realized that chalk paint does away with the need to power sand furniture—even though I explained this fact to him like a million times. He denies I said anything, but I did. It's the entire point of chalk paint, and why the stuff costs a small fortune.

So Jake got upset because he likes sanding. Therefore, removing the sanding part felt like I was removing him from The Project. Then I got upset because re-painting furniture without the hassle of sanding had become (in my heart) this soul nourishing, creative outlet. I needed to be rid of the sanding. I cried and stormed off, not quite realizing why this fight was triggering such depth of emotion in both of us.

A while later, when I had processed and fumed some more, I informed Jake that it didn't matter if there was no sanding, I had to paint with chalk paint. I needed to make something beautiful in a short timeframe and he could go to hell.

I'm so sweet when I want to be.

I wasn't upset about the thing—the actual refinishing project. I was upset about the thing behind the thing—having two kids that suck the life out of me and desperately wanting something easy and creative to do. There were all kinds of emotions boiling underneath the surface that I'd had no idea about.

Jake accepted this and dealt with his own frustration as well. We moved on.

I trolled Craigslist for a couple of weeks and managed to score us an entire kid bedroom set for $90.00. But the bed part was a stackable bunk bed, something we can't use right now. Sean is two and he thinks he can fly. The bed needed to be on the ground.

Yay, I thought. Now Jake can be part of The Project again and all will be well. I asked him to build legs or a base for the bed frame so we could make it more like a real bed and less like a mattress on the floor. A couple of heated conversations ensued and for the life of me, I couldn't figure out why Jake was getting so angry.

He started throwing around phrases like, "It can't be done," and, "We should never have bought this."

All this drama to add four legs to a bed frame? I was flabbergasted. I informed him that there was no need for this level of emotion (completely forgetting my own meltdown a couple of weeks prior) and went to play with the kids. The next day Jake apologized and explained he'd needed time to process what I wanted and he also felt like all of my ideas about the bed legs challenged his ideas. He thought I was controlling him and taking away his part in The Project.

He wasn't actually upset about building legs, there were emotions being triggered by bed-leg-building.

So we realized we're a hot mess when it comes to refinishing furniture! For whatever reason, we both feel very deeply about sanding and painting right now. Which is fine as long as we become more aware of our feelings and try to treat each other more gently as we move forward.

We've made a little pact—I can't read Jake's mind and he can't read mine, so we're going to try communicate better when we feel strongly about a part of this refinishing project. We're going to try to explain why we feel upset and how the other person can support us through these emotions. It's not a fool-proof plan, but hopefully it will cut down on arguments and teach us to be more graceful towards each other.

99 Thoughts on Marriage and Ministry, with Group Publishing/Simply Youth Ministry.
They currently live in Connecticut and have two children: a 2-year old boy who is crazy active and likes to bang on everything he can and a little girl who is just about to start crawling and make our lives really crazy. :)