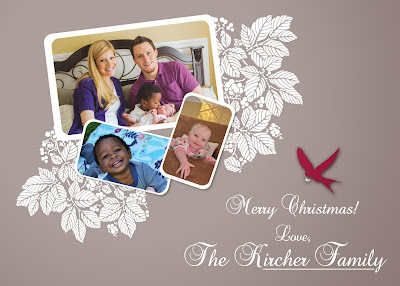 We want to just wish all our readers a Merry Christmas and Happy New Year!! It's been quite an incredible year for us:


And this is all on top of Jake's full time job as Youth Pastor at Grace Community Church, Sean's second year of life (he turns 2 on January 18th) and pregnancy/Nora enjoying her first 6-months of life.

Just seeing this list makes us overjoyed at what God has done in our lives and families this past year. We are so thankful for all of the people who have blessed us and been through it all with us!

May you find many blessings for 2014 for you and your family!

Posted by Jake and Melissa Kircher at 1:36 PM

Jake and Melissa write regularly for Relevant Magazine (www.relevantmagazine.com) and Simply Youth Ministry (www.youthministry.com). They also just finished their first book, 99 Thoughts on Marriage and Ministry, with Group Publishing/Simply Youth Ministry.
They currently live in Connecticut and have two children: a 2-year old boy who is crazy active and likes to bang on everything he can and a little girl who is just about to start crawling and make our lives really crazy. :)