Okay so I like reality TV. Not the Snooki variety, I mean you have to draw the line somewhere. But the Kardashians...yeah I'll watch 'em. Most things on E!, cupcake wars, you get the picture.

And right now there's not a whole lot to do at night after the kiddo goes to bed. I'm 8+ months pregnant, feeling every inch of that and let's just be honest, there is literally no sex happening in the Kircher household right now with this bowling ball of a belly. So I started watching "Ready For Love" to while away the evening hours.

I have to say the whole matchmaker slant is intriguing. The Bachelor franchise hasn't done much for me. It's shallow, nobody lasts, seems more like a ridiculous cat fight then anything else. But this show's advertising promised to be different. They wanted to find three matches that would end in real love and forever marriages.

Even possible on TV? Skeptical and bored and ready to be entertained I plopped myself down.

The first two episodes were interesting. I even found myself listening to the matchmaker's advice (there are three of them) and wondering how that would have applied to my dating relationship with Jake when we first started going out.

I asked Jake, "Ok, so the dude matchmaker says that you need to let a man feel like a man. Give him those moments and don't take them away. Like if he offers you his coat or to take care of something, let him do it. Don't shrug off the coat because you don't want him to be cold or fix the thing yourself. Let him have a man moment. Is this true?"

Jake affirmed yes, this is true. Putting aside all the gray areas that go along with gender stereotypes, sometimes men just need to feel like manly, I guess. Shoot...learn something new every day!

Then one of the lady matchmakers talked about not letting an insecurity show through on a date, because then that's all a guy will think about and associate you with. Jake and I had a nice discussion about this. If the show's whole deal is getting these three guys to the alter, shouldn't insecurities and flaws definitely be part of the mix? We ended up agreeing that her advice was total crap. In order to have any kind of real connection you have to show your flaws and insecurities. The hard part is competing with other people for someone's attention/affection. Then you want to put your best foot forward. But at what cost to a real, deeper relationship down the road? This whole scenario is of course not quite totally how it goes in the real world. 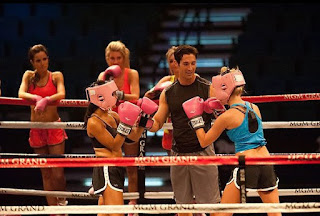 As the show has continued (yes, still watching) I'm liking it less and less. Which is disappointing b/c I'm obviously not hard to please in the TV department, but also having this matchmaker element could have been super interesting. Made for real discussion about marriage and what it takes to get there. Could have been really cool. But of course TVland has to stick all the potential matches in a house together. Which creates drama. And good TV. It's becoming less about marriage and more about winning and something that had promise is falling flat, yet again.

I think this whole idea of matchmaking is so interesting though. It's apparently something that many, many, many people do now in addition to meeting people online and going through dating agencies. The whole dating world is changing and it's good to have dialogue about what's necessary for a connection in terms of leading to marriage. Heck Jake and I just dated. We just sorta did it without thinking right away about marriage and all this serious stuff. But now people are getting married so much later in life, there's this shift and pressure to get to the point right away. Which is why I can totally  get going to a matchmaker.

Are any of these people truly ready for love? Who knows! I'm slightly hooked at this point and it makes good talks for Jake and I. I'm kinda doubting we'll be seeing any lasting matches out of this, but you never know!

99 Thoughts on Marriage and Ministry, with Group Publishing/Simply Youth Ministry.
They currently live in Connecticut and have two children: a 2-year old boy who is crazy active and likes to bang on everything he can and a little girl who is just about to start crawling and make our lives really crazy. :)